OpenDrift comes with a basic Graphical User Interface, which can be started with the command: 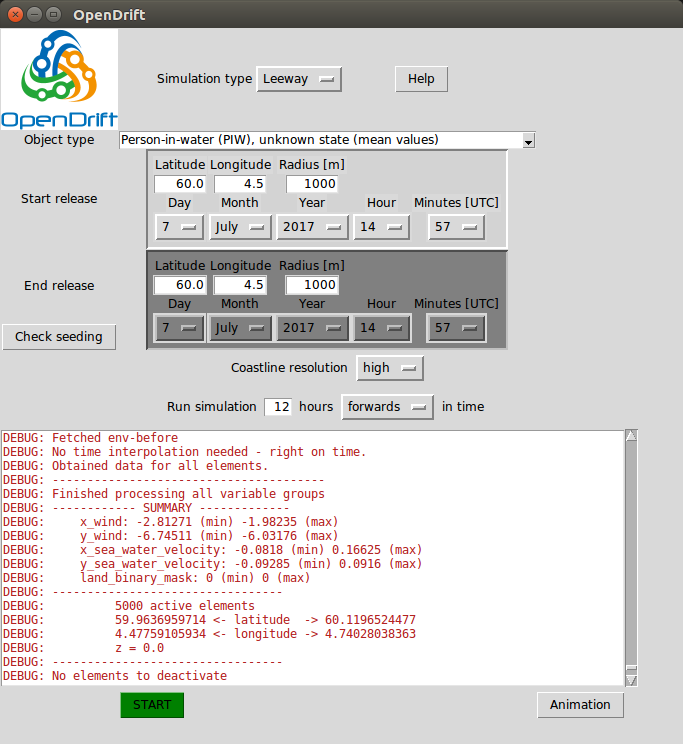 Choosing a model and parameters

The Leeway model (Search and Rescue), OpenOil (oil drift), ShipDrift model and OpenBerg model are available in the GUI.

The first step is to select the model of interest from the upper menu. If Leeway or OpenOil are chosen, the second dropdown-menu will allow you to select either

If the ShipDrift model is selected, the dimensions of the ship can be selected (beam, length, draft and height).

The ice berg drift simulation has parameters wind_drift_factor, water_line_length and keel_depth. The wind_drift_factor is unlikely that you need to change, while the other parameters describe the geometry of the ice berg. These are described in more detail in the OpenBerg reference at Parameters and iceberg properties affecting drift.

The following steps are the same for all models:

The sources used for current, wind and waves are given in this list, in prioritized order. The forcing data are obtained/downloaded from remote servers (Thredds, OPeNDAP) during the simulation, and has global coverage, but high resolution for the North Atlantic only.

Whenever wave data is not available, OpenDrift will calculate wave parameters from wind.